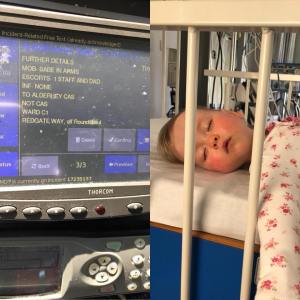 Yesterday marked 1 year since Isla had her last Torsades and we ended up with the defib on her waiting for an ambulance to come and take us to Bolton and then transfer us to Alder Hey.

The Torsades was a stark reminder of what we’re dealing with. It is a form of arrhythmia which can be self terminating i.e. stop on its own, or it can descend into ventricular fibrillation which is also known as a cardiac arrest. Initially I thought Isla had just had a seizure as that’s how it presented on the outside. Essentially her heart’s rhythm wasn’t good enough to oxygenate her brain and she had a form of seizure. It got to that stage due to Isla vomiting not long after having her Mexiletine. This was always a conundrum as if we regave a full dose and she had absorbed some of the original, she’d go toxic and have a seizure… so we kind of had to guesstimate how much to give again after a vomit. The problem at this time however was she had done it a few times so there were a few guesstimate doses. The result being we underdosed her and she was on the verge of cardiac arrest.

So we arrived at Bolton for immediate monitoring until it could be arranged for us to be transferred to Alder Hey. Unfortunately Isla is just too complex for Bolton. Times like these you are taken down all the tradesman routes in a hospital and get to go down forbidden corridors and lifts… it’s not as exciting as it sounds… unless you’re really into that kind of thing.

You’d think being at a hospital where you can literally see 4 ambulances parked up you wouldn’t be waiting for an ambulance for too long. Apparently it doesn’t work like that… even though we’d arrived at Bolton in an actual ambulance. We spent a good few hours waiting on a NWT transfer with specialist staff for the relatively short, but can seem like a lifetime long journey from hospital to hospital.

Due to the delicate nature of Isla’s condition at that time I had to sit in the front of the ambulance taking us to Alder Hey so that there could be a full team in the back with her. Our last transfer to Alder Hey we had one of the Alder Hey ICU Sister’s working on the NWTs team who knew her well and kept ploughing her with sucrose. Plus I could see her and hold her hand. This time I could only watch the motorway. If you’ve ever been in or with an ambulance waiting to go to hospital you know it seems to take hours to leave. I was pretty sure I could have just run down the M62 with her and got there quicker in the time it took them to fanny about in the back of the ambulance. And I have asthma. Kerry and her mum set off about 30 minutes before we did but I got a biscuit and juice pack so I forgave the team.

Not being able to see Isla was torture for me! However, it was pretty enlightening being in the front of the ambulance. You realise how far in advance the driver looks and thinks. Next time you see those flashing lights or hear that siren, just move. Don’t try and overtake one more car, just move out the way. I was getting seriously pissed off watching people think they were quicker than they were and leaving it until the last minute to move as I saw how much it slowed the ambulance down. Even with a motorway of cretin drivers we still beat Kerry there by some time. She says she wasn’t one of the cretins and we flew straight by… that’s what she says anyway…

We’ve learned a lot since that incident but we’re still learning more every day. At our last clinic appointment Isla’s consultant told us he was on the verge of sending her to Great Ormond Street as she was looking too tricky for them. Isla is his only SCN5A patient… and the only one he knows of. She is still being discussed between Dr Johnson and his colleagues at GOSH as at some point she will need an ICD. As it stands they are happy with me monitoring her ecg at home and adjusting doses accordingly. While this may result in some seizures occasionally as I keep her at the top end of safe, I’d much rather she had a seizure than a cardiac arrest. It’s kind of being stuck between a rock and a hard place but as much as I hate seizures I have become more confident dealing with them and at least we know the cause of them (most of the time)

At the moment I’m just feeling very grateful that we’re at home and she’s happy. Isla hasn’t had a good few days, maybe a virus but she has clearly been in pain and had a few seizures. Being ill clearly changes how she absorbs her drugs, Mexiletine itself causes stomach pain and we know that pain is a trigger for her seizures. It sucks. However, it does give some perspective. When you see her wiped out and sleeping all day, just crying when she’s awake, the fact that she is delayed in a few things doesn’t matter. Shit days make her smiles seems brighter and her giggles more joyful. If I ever start sounding bitter about healthy kids again, please remind me of this. Last year she was a ‘Babe In Arms’ now she’s a Babe In My Arms.