This is the epic story of Isla’s Long Qt treatment. I’ve split it into 4 parts so not as to bore you all too much!

Isla has rare condition called Long QT Syndrome Type 3. Long Qt as a whole affects 1 in 2000 people, possibly more, however this figure may well rise as more is learnt about it. It is a genetic electrical problem which prolongs the repolarisation of the heart i.e. it takes too long to reset after a beat. There are currently 15 known types of Long Qt Syndrome categorised by the various gene mutations which cause them. The diagnosis of LQTS is not easy since 2.5% of the healthy population have a prolonged QT interval, and 10–15% of LQTS patients have a normal QT interval.

The problem with Long QT Syndrome in babies is, if it presents so young, most babies don’t survive the pregnancy. Some cases of cot death may in fact be attributed to undiagnosed Lqts.

While in Manchester Isla was on a cocktail of cardiac drugs to try and slow down her chaotic heart rhythm. This was possibly the worst thing that they could have done. It wasn’t until the regional cardiologist (fortunately in the area while we were in Manchester) suspected Isla had Long qt that all the drugs potentially making her worse were stopped. The initial reaction was start her on beta blockers as soon as possible. They didn’t do this as beta blockers slow your heart rate, and in some types of Long qt this actually exacerbates the problem. For this reason it was decided Isla needed a pacemaker. With a pacemaker fitted, they could give Isla beta blockers without the risk of her heart rate decreasing and causing more arrhythmias.

Now with no drugs other than sedation (because she was ventilated) the transfer to Alder Hey was arranged. No one was confident she would make it to Liverpool but it was our only chance.

We were incredibly lu

cky that the night we arrived at Alder Hey, the surgeon Ram had just arrived back in the country after doing charity work performing heart surgeries in India. I don’t really share pictures of super poorly Isla, but believe me, how he managed to even find her stomach on her swollen, bloated little body is a mystery in itself. Upon hearing the news that the surgery had gone well and her heart was for the first time in about 20 weeks in some form of regular rhythm, all I could picture was a room of surgeons and staff high-fiving each other… hopefully with clean hands! 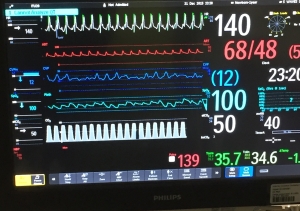 Seeing my baby on a huge bed with drains and wires everywhere, now free from an incubator, was both heart warming and heart breaking at the same time. She looked about half the size of the baby they took down to surgery. Now this could have been for one of two reasons:

1. She was in fact about half the size. To fit the pacemaker they had to drain a lot of fluid from her stomach and she had a pd drain draining even more fluid. She had weighed 2.9kg, she was now 2.2kg.
2. She was on a massive hospital bed. This was because she was post op and they still needed good access to her in case of emergency.

The fact she was now only 2.2kg and they’d drained so much fluid, with lots of fluid still to come off, it meant that actually all her drugs had been far too high. The endocrinologist has since estimated her dry weight was probably around 1.6kg. However, with a pacemaker fitted and a weight established they were able to start effective treatment.

Isla provided the doctors at Alder Hey a big problem. As I’ve mentioned before, being an rhythm baby means Isla is really outside of the bread and butter of the expertise of regular cardiologists. Of course they’d seen Long Qt before but Isla is Type 3, which requires treatment in addition to beta blockers prescribed to protect those with other types of Long Qt. They’d never had to deal with a type 3 baby before. At the time, all of the Alder Hey consultants were all surgical. Long qt patients really require an electrophysiologist to treat them.

With that said, Isla was started on Propranolol, a common beta blocker used to treat long qt. At this time there wasn’t a genetic diagnosis of Long qt 3 so she was just treated for standard long qt. Although the pacemaker set a rhythm for Isla, and her beta blockers were there to stop her heart rate going too high, she still had breakthroughs of arrhythmias.

One night we went arrived back at ICU, after having our first meal out together in about a year, to find Isla’s nurse almost buried in receipt style rhythm strips. There were literally full reels of Isla’s bizarre rhythm covering her bed space, her alarm binging away, the nurse chasing down the doctors and buzzing for help every 2 minutes. It was awful. They didn’t even really know what to call her rhythm – some said it was VT (ventricular tachycardia) and some said she’d gone into VF (ventricular fibrillation which can only be terminated by shocks). Our nurse that night called it the ‘weird swiggly thing’… to be fair it’s a great description as it is very similar to VF.

Isla’s ability to do this weird rhythm made her infamous around the ICU and gave her a reputation as a scary patient. We are told nurses did fight over having her to look after, how true this is I don’t know, but lots of the nurses loved her despite her potential, and indeed tendency, to give them nightmares. Isla was on a lot of drugs so she wasn’t the easiest of patients!

I googled nearly every little thing I heard mentioned by the doctors and nurses. It was at this point I discovered there was a list of drugs that prolong a persons Qt interval. Of this extensive list that shouldn’t be given to long qt patients, Isla was on 5 of them, including a diuretic to help with her fluid retention, and chloral, a common drug used to settle distressed patients in need of mild sedation. I immediately made the nurses and doctors aware of this list, it was printed out and put in her notes, and the offending drugs stopped or swapped for safe alternatives. This did help reduce the frequency of arrhythmias but she was still having runs of ‘weird squiggly thing’ around 5 times a shift.

It was also around this same time Isla had her first bout of sepsis and was given iv drugs to fight the infection… of course initially the first antibiotic given was on the list of prohibited drugs before the pharmacist picked up the mistake and prescribed a drug which wouldn’t kill her!

Eventually Isla’s genetic testing came back confirming she had Long qt 3. My wife and I also had genetic testing. This led to many nights of us worrying we might have the condition and wake up in the morning to find the other one dead. While unlikely as we’d survived up until now with no symptoms, it was still a worry as Lqt is usually an inherited condition. Despite having about 100 blood tests done while pregnant, including a good old fashioned butchering at the hands of an amateur, my wife was terrified at having her blood taken again. I did explain that the doctors on this ward can get Isla’s blood out of her veins first time, our veins would look like the M6 to them. Actually, the M6 is probably a bad example given it’s nearly always congested or harbouring a 6 car pile up.

With Isla’s genetic testing confirmed, an electrophysiologist from Liverpool’s adult heart and chest hospital came to visit with a plan. It was going to be a slight experiment. The pacemaker team arrived, the cardiologists, Ecg technicians, the ICU doctors and consultants, a few extra nurses, and to increase the already ominous situation a defibrillator was wheeling in next to her bed… They were ready to try something new. Nothing else was working and able to control her arrhythmias.

They turned her pacemaker down to below her intrinsic rate and started the new drug. The team watched hopefully on the 12 lead ecg machine as the drug was slowly introduced into her system. I managed to stay in the room but it all got a bit much for my wife who couldn’t bear to watch. It was intense. Initial signs seemed to be positive, the drug was reducing her Qt interval, they increased the rate of the drug, it reduced further. It all seemed promising and after one further increase and the drug not having any more impact than already achieved, her dose was set.

Isla’s consultant explained the mechanism of what the drug was doing. Flecainide is a sodium channel blocker and the issue with Long qt 3 is there is a late burst of sodium which means the next electrolyte is delayed in entering the heart. The Flecainide should solve this and after monitoring it for a few days we should be able to go home. Flecainide: our new hope.

We left the hospital that night feeling optimistic. The new drug seemed successful. We had a nurse on who we loved and had had Isla the night before. We slept well that night. We shouldn’t have. While we were sleeping, things were getting serious. The defib was back in Isla’s room and the staff were on the verge of ringing us on more than one occasion to rush back to the ICU. The Arrhythmia Strikes Back.