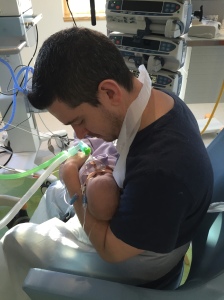 We arrived the next day to find Isla had gone back a stage on her breathing support. She’d had a bad night. Then in the time of us being there for an hour, she had 5 reasonably long squiggly things. Flecainide clearly wasn’t the answer. Over the 6 weeks or so of my Googling, I had begun to understand a lot of the medical journals and basic concepts in cardiology. Isla was already on a iv magnesium 4x a day. However, I discovered that iv magnesium was the key to stopping one of Isla’s weird squiggly things.

The weird squiggly thing was in fact called a Torsades de Pointes (turning of the points). The reason it looked so much like VF and nurses confused it with VF, is Torsades de Pointes can deteriorate into VF requiring shock. We discussed with one of the consultants that Isla should have iv magnesium as a rescue drug when she needed it to break her out of an arrhythmia. It became quite apparent from watching her monitor every minute of every day, her arrhythmias occurred just before magnesium was due. This led us to calling the hour before magnesium, danger zone.

One particularly evening we had a nurse we’d never had before. She didn’t know Isla. Well, it was coming up to danger zone and things were going wrong. My wife and I knew what was about to happen. We told the nurse that her magnesium was low and she was going to go into Torsades. Unfortunately for us it wasn’t written down that Isla could have extra magnesium. The way she was burning through it was a mystery but it meant that she needed higher than normal blood level in her system. We asked the nurse to give her some magnesium but she said she’d have to take some blood, send it to the lab and wait for the level to come back. No. It would be too late. She asked the sister in charge. No, the bloods need doing first. It was at this point we lost it. Isla went into Torsades, as we predicted. It was a long one. They pulled the emergency buzzer and we left the ICU pod screaming at the nurse and the sister. We felt so let down. This was the time we were offered psychological support!

One of the doctors managed to stabilise her before she needed shocking, using surprise surprise, magnesium. She was more than aware of Isla’s magnesium needs! Now it needed formally writing down in her notes so this wouldn’t happen again. Isla’s Flecainide was increased to the maximum dose for her weight and the consultant on ward round and informed us that we might just have to put up with Isla having a few Torsades a day.
I’ll say that again.
Put up with a potentially fatal arrhythmia a few times a day.
If they weren’t going to take this seriously and solve the problem I would.

Isla was still on a high dose of beta blocker. She was actually now on a different beta blocker, but a much, much higher dose. Due to the fact it slows your heart rate, and all the literature stating there wasn’t much evidence for beta blockers being effective in LQT3, I began googling whether or not Isla should even be on Nadolol. This turned out to be one of the best googling decisions I’d ever made.

It was about 2am and I was trawling for answers. Eventually I found a post on Inspire. It was a lady whose daughter had arrhythmias in utero and they’d suspected LQT3. She was treated with Mexiletine and Nadolol. Her name was Teryan Sanders. I thought that was a pretty unusual name, so I searched on Facebook and sent a message to the first and only woman on there asking if it was her who had posted about LQT3. It was! She told me all about how she was treated and how initially they wanted to start her on Digoxin, like my wife was, but her Doctor, Dr Knilans in Cincinnati had a suspicion it was LQT3 and started her on Mexiletine and Nadolol.

The stars must have aligned in meeting Teryan because there’s a few little miracles here. Teryan is actually a misspelt version of Taryn. If she’d have been Taryn Sanders, there’s 31 of them on Facebook and I probably wouldn’t have ever found her. She’d actually forgotten about posting that message on Inspire. It’s also fortunate that she’s one of the nicest people in the world and wasn’t scared off by a random Brit contacting her out of the blue. I chatted to her that night for hours and she said prayers for Isla and asked her friends and family to do the same. I’ve no doubt she’s her guardian angel.

My wife woke the next morning to find me, still texting on my phone, wondering why I hadn’t been to sleep. I told her excitedly, “I’ve been chatting to a woman in America all night!” I don’t think she was too happy about this news out of context… but fortunately understood when I sleepily explained the situation.

At the hospital I told the nurse looking after Isla the information I’d gained overnight and how I thought Isla should be on Mexiletine instead of Flecainide. Mexiletine had actually been mentioned by one of the consultants but dismissed as it’s rare, hard to get hold of and not really used any more. The nurse asked me to write all of this down and she’d give it to the cardiologist when they came round.

I think there must have been a bit of magic in the air again that day as the consultant for the week took a great interest in this new information and was keen to speak to Dr Knilans in America. Teryan gave me his email and phone number and Dr Jones got in touch. Dr Jones still needs to work on her American accent but together they came up with a new plan. Things were beginning to take shape.

Led by Dr Knilans in Cincinnati, Isla was to be taken off Flecainide and transferred onto Lidocaine, which is an iv version of Mexiletine. The big problem here was that to do so, she’d have to be back to no drugs at all. She made it nearly a full day before having a cluster of arrhythmias. Starting iv Lidocaine, things almost instantly things improved. On the top dose of Lidocaine her rhythm was pretty much perfect. It still wasn’t as clear as it should be meaning the qtc was still long but it was the best we’d ever seen it. The electrophysiologist had told us that given Isla’s qtc we’d be lucky if it was ever under the ‘very long’ tag of 500. It was now about 480. The challenge was to lower the iv Lidocaine and introduce the oral Mexiletine. It was this balancing act that almost proved fatal.