We’ve recently had a little stay in Bolton Hospital as Isla had tonsillitis and high temperatures and seizures. It made me reflect on what a raw deal she has had. Something as simple as tonsillitis, which all toddlers get, gave her seizures. It’s obvious from the Mexiletine trials that Isla is prone to seizures but it would be remiss of me to think we won’t see them again, milk or no milk. It’s worrying that every time she picks up a virus or gets hurt she is at risk of having a seizure. Needless to say anxiety levels have increased of late!

What is reassuring is how quickly she’s starting to bounce back from seizures now. Over Christmas we had a blip (tried dairy free to reduce Mexiletine dose, story for another time) and after a few days of seizures, she’d ‘forgotten’ how to walk. I’m not a brain or development expert so I don’t know if that’s even possible but she went from a free-walking, wobbly toddler to rolling and crawling. She has had the odd seizure since then but each time (after a dose of Oramorph for the pain) she’s recovered and still been Isla. It’s a relief that it’s not harming her other than taking days off her development.

Recently Isla was assessed by Portage, so she can have some catch-up home education before nursery. As per most healthcare professionals, the lady was impressed at how she’s doing ‘given everything she has been through’. If I was given £1 every time I heard this phrase I’d be rich… Ok not rich but I might have money in a note form which is rich for me right now! In most aspects Isla was assessed at around 18-24 months, so reasonably age appropriate, but with play and social interaction, she only hits around 12 months. While this is disappointing to hear, I do have to remind myself that she has actually been through a hell of a lot. She’s missed the first 3 months of her life completely, then the other 5 were still attached to monitors. After that she had seizures which knocked her out for days and weeks at a time. When I consider all that and the number of days she’s been conscious, she probably has had only 12 months of social development and opportunities to play. It’s still hard to see her peers doing things way way ahead of her but I also see the progress she makes on a day to day basis and I’m so proud of her.

On March 2nd we went to the Healing Little Hearts ball, an event organised by Claire, the mum of Jake who was the other rhythm rebel in Alder Hey when we were in. I saw a lot of things while in Alder Hey but you obviously don’t hear and see everyone’s story so it was nice to meet lots of other families who’ve been to hell and back. I say ‘nice’, they are all lovely people, it would have been nice to meet them under normal circumstances without the hell and back part. The reason Claire chose Healing Little Hearts is our hero surgeon Ram, works for them providing free surgeries for families in countries with no NHS. It was our way of saying thank you to Ram and appreciating how fortunate we are. We have free healthcare and the surgeons give our children a chance at life. At the Ball we met lots of families whose children had sadly not survived despite the best efforts of Alder Hey. I can’t speak for them because I can’t imagine their pain, but despite it being the worst possible outcome, their children were given a chance. 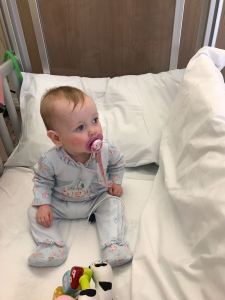 I don’t want to use the word lucky here because when it comes down to it it’s pure shit luck that I even know them, however, we’d all do anything for our children so for them to have the opportunity to have potentially life saving surgery is something we can be thankful for.

I started this saying I’ve been reflecting. Isla has had a raw deal; She’s been through so much but she amazes me every day with her will and determination. I look at healthy 2 year olds and feel a pang of jealousy, but now I think about 2 year olds who are fighting for life without a hope or an opportunity to have ‘simple’ surgery like Isla did and I feel lucky.