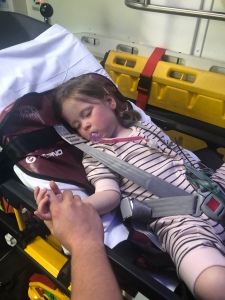 ‘Hi, it’s the fitter from Hillary’s Blinds. How’s it going?’

‘Errrr it’s ok, well depends on you’re definition of ok but could be worse.’

‘Just ringing because I need to come a bit earlier if possible, having one hell of a morning.’

‘Whatever your morning has been like, I’ll guarantee mine is worse. Hence the need to change plans a bit.’

‘Ok… well I’m in Great Ormond Street because my little girl had a cardiac arrest and is on the High Dependency Unit.’

I think I flummoxed him a bit with that one. And yes he did say hence. It’s not really a contest anyone wants to win, ‘Who’s had the shittest day so far’, although it’s probably something MTV would make a series out of. Needless to say I had had the worst morning. It’s incredibly easy to get caught up in day to day stress and little things that at the time matter… in the grand scheme of things, do they really?

I know for a fact that I hadn’t even had the worst morning in the HDU that day, let alone the hospital. It’s sometimes hard to think there’s always someone worse off than you. I try not to think about the worst case scenarios for Isla but events like last week really escalate your thoughts. Knowing Isla was shocked is gutting, but thinking about the implications of her being shocked really upsets me. For her to be shocked it means she was in cardiac arrest. Her heart was no longer acting as an effective pump to circulate blood… which under some definitions means she wasn’t alive. I like to think of the definition ‘you’re alive until a doctor says you’re dead’ but it still terrifies me. It makes me so grateful she now has Miss Sparkles (Her ICD); With an ICD, 19 out of 20 people survive a cardiac arrest. I really don’t ever want to have to perform CPR again. It’s awful to think that Isla having an aborted cardiac arrest doesn’t even make her the saddest case on the ward. It really gives you perspective.

Speaking of perspective… I was considering buying a new mattress in June and getting a fancy new hybrid memory foam bad boy or something. My current mattress didn’t feel the comfiest anymore and I was really contemplating treating myself. However, a week on hospital style plastic mattresses and rubber pillows, it’s like I’m floating on a cloud on my old Silent Night! I have a whole new found love for it.

There doesn’t seem to be any particular reason for this last cardiac event. We had literally been at Great Ormond Street that day and been reviewed. All seemed well. It was only when we got in the car after a train ride home to Manchester that Isla decided it was time to throw off some funny rhythms. Calling an ambulance isn’t nice even when you’re at home and you know where you are. Calling an ambulance when you’re on the M60, on the inside lane, in rush hour traffic… even less fun.

‘Can you pull over somewhere so we know where to send an ambulance?’

‘No not really. We’re in the middle of traffic!’

Eventually we got off the motorway and managed to negotiate a place a static location for the ambulance to find us. It really was inconvenient timing from Isla on many fronts! I don’t think there is a good time to have a cardiac arrest and be shocked, but this was really bad timing.

As a result of her latest arrest, her medicines have been upped and the timings of Miss Sparkles adjusted. She will now get shocked after 4 seconds of ventricular fibrillation rather than 6, and she’ll be shocked after 12 seconds of ventricular tachycardia. This has risks and benefits. Risks are that she could now be shocked out of a rhythm that could correct on it’s own. She could also be shocked inappropriately, i.e. running about and her heart rate goes above the shock threshold for too long. Benefit of course that she won’t be in a potentially fatal rhythm for as long. This in turn means she’s less likely to have a seizure. While that’s good… obviously… a seizure is a clear indicator that something has gone wrong. Her last shock occurred when she had a seizure and then burst into tears. I can’t exactly call 999 every time she bursts into tears. She’s a toddler so can cry randomly because you won’t let her drink bleach or something. On top of that she’s a woman, which means she can cry about nothing, for no apparent reason, at any given time. The reassuring thing though is that if she does go into a dangerous rhythm, it should get her out of it, whether we know about it or not.

One of the things they discuss with you before ICD implantation is the potential psychological damage of inappropriate shocks. However, they don’t talk about the psychological impact on loved ones. Having to learn to trust again is hard. As soon as we think we’re on top of everything and getting confident going out and about something happens to knock us back. As I said, there doesn’t seem to be any rhyme or reason for this last shock. It just happened. One day everything was working, the next day it wasn’t. I have to just accept that and live with it in the back of my mind. The scary thing is that Isla is due to start nursery in September. I expect the men in white coats will be coming for me!

I have no doubt that Isla will be shocked again in the not too distant future. I hope she won’t be, but I’m fully prepared for it. If she does it’ll be a bad day. I know there will be people out there having worse days, but next time the photocopier is broken or you have a deadline and not enough time, in the grand scheme of things… is it really a bad day?