Anyone who knows me knows I like my superheroes. I especially like Superman and have a good few things around the house with the Superman ‘S’ on it. My favourite mug is a Superman mug. I have T-shirt’s with Superman on. Isla has Supergirl artwork and I love the Supergirl tv show. Why particularly Superman? Well the S isn’t an S; it’s the coat of arms for the House El but also the Kryptonian symbol for Hope. I suppose that’s why I like it so much. Isla is my Supergirl but I also have to look at her and hope. I love the reminder that hope is all around me. Sometimes I look at my coffee cup and just hope I’ve made a good cup of coffee as my coffee making skills are very uneven.

This last hospital admission has put the frighteners on again. Isla was just in her highchair enjoying some raspberries when she had her Torsades. Her device will only allow 12 seconds of Torsades before shocking her. The report from her ICD showed 12 seconds of Torsades before she reverted back to normal rhythm on her own. She was literally milliseconds from being shocked again as the device was charged up and ready to deliver the shock. There had been no warning signs that day, it was literally out of the blue. The upshot being – you can’t turn your back on Isla for even 12 seconds. Any confidence of being able to let her play in the lounge for a few minutes while I wash up or do a few jobs is gone. If there’s any consolation though Isla seems to have most of her arrhythmias at around the same time each evening, not during sleep when Long QT Type 3s are supposed to, so at least I can now sleep soundly (not). Not done the ‘not’ thing for a long time 🤣.

The best thing about this admission though is the plan to really investigate Isla’s gene mutation. A geneticist in the US studies Long QT 3 mutations specifically so she may have some information about Isla’s somewhere in the archives. Scientists do lots of research which often they don’t bother publishing as there’s not enough interest or reason to do so. If the data isn’t already there, she will create Isla’s sodium channel mutation in a heart on a computer and mimic the action potential and the faulty ion channel. This will allow her to test which drug will work best for Isla and be the most effective at blocking her naughty sodium channel. Once she has that information she can test it out in real life in mice. It’s amazingly clever stuff. This is where my hope comes in.

I hope that this gene therapy is the answer to Isla’s problems. Mexiletine is evil. I love it because it keeps Isla alive, but it’s also preventing her from living. We’re on the lowest viable dose now and she is more interactive and developing more but she is having potentially deadly cardiac events. Yes her ICD is there to save her now but I hope one day Isla is released from her brain. You can see it in her and she wants to do things, she’s learning and picking things up, but it’s like she’s trapped. Dr Starling is convinced this is the result of her extraordinary Mexiletine dose. Mexiletine is often used for muscle dystrophy and it has a huge neurological impact. I asked if Isla was on the equivalent dose of Flecainide would she suffer the same neurological toxicity, the answer, no. However they don’t want to try swapping Isla’s drugs without any research. She’s too high risk for trial and error because she’s so sensitive to the drugs and an error would most likely be fatal.

It may well be that the study is done and the only thing that works is Mexiletine. But I have to hope it shows us an alternative and a better treatment for Isla. I hope Isla will talk, be able to communicate and do things that her peers do. Don’t get me wrong, it won’t matter if she doesn’t, I’ll love her no matter what, but it’d be good for her as she wants to do so much but something is stopping her. I just hope that a change in drug regime is the answer. There’s no rush though, her staying safe and being alive is the number 1 objective. It’s been said so many times that Dr Johnson and I did so well to even get Isla this far, muddling through with home Ecgs and an extremely complex drug regime. It’s only dawning on me how true this is. The world’s greatest minds are on the case and only doing marginally better in terms of arrhythmia (they’re kicking our ass in the fact she’s had no seizures). The thing that got me through those times was Hope. Hope that things would get better. And they have. So I’ll keep on hoping and keep on doing my best to give Isla the best life possible. Superman and Supergirl. Isla-El. 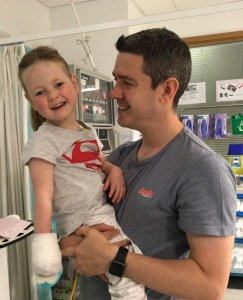